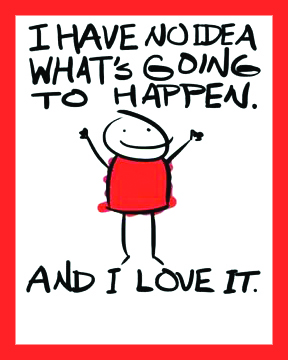 For some reason, strangers talk to me. All the time. I don’t know why, but they do.

I’ve seen people walk by an entire aisle of shoppers in the grocery store, then approach me… “Where can I find the cinnamon? My wife needs the cinnamon and I can’t find it. She’s gonna kill me.”

Once a cashier felt comfortable enough to hide behind the counter, then jump up and yell “Boo! Did I scare you?”  Of course, not wanting to hurt his feelings… “Well yes. Yes you did. I didn’t even see the top of your head as you were hiding on me.” Since I never met him before in my life… I don’t know why the comfort zone.

I even had a woman sit down next to me in the mall and tell me about the corns on her feet. She was going to show me. I’m dead serious. She wondered if I thought her shoes gave her enough arch support. Clearly, I look like an orthopedic specialist, and didn’t have the heart to tell her I was just a graphic designer.

And, I love it when people mistake me for someone else. I had a “twin” in college; a local bartender that looked very much like me. People called me by her name all the time. One day, her ex-boyfriend approached me and started conversation. I said “I’m not who you think I am.” He became upset…“Really? You’re going to act like you don’t know me after we dated for nine months?!” So, I showed him my driver’s license. By the look on his face, I think he may have done a doo-doo. And I’m thinking…How could YOU not know your own girlfriend. He apologized profusely.

But, then there are the encounters that are really sweet…

Once, there was a women in a restaurant that was thrilled to see me. She thought I was her niece. Her daughter whispered that she had Alzheimers. When I looked at her face, her eyes lit up! So, I sat down in the booth next to her and visited a while…pretending to be who she thought I was. She was so happy — it made me happy. That stuck with me. When a few minutes of your time can make someone’s day, spare a few minutes of your time.

But, my all-time favorite was on Christmas Eve. I call this story “Build it Anyway.”

My kids didn’t feel like going to the late night church service, so I went alone. An older, very sweet woman sat next to me. She reminded me so much of my grandmother it was hard not to stare. And, ironically, my grandmother’s birthday was on Christmas Eve.

When it was time to greet your neighbor, she reached out and patted the top of my hand. My grandmother always did that. It was one of those things I remember so clearly about her.

When the service ended, we exited out the same door. She veered to the right, and I headed to the left. It was snowing, lightly, but the snowflakes were probably the biggest I’ve ever seen in my life. Now, this woman was about 20 ft away and she stopped suddenly. She turned around and said… “Have you ever seen snowflakes like this before?” I commented that they were really beautiful. She said she wanted to go home and build a snowman. But, considering she was over 80 years old her neighbors would think she was nuts. I smiled at her and said “Build it anyway.” She laughed, “Ya know what…I think I will.” Then she waved good-bye and said “Merry Christmas.”

So yeah, I do talk to strangers. I mean, not in a dark alley or anything. And I certainly don’t take candy from them. But I don’t ignore people who cross my path.

Some of them need help, some of them make me laugh…or need us to make them laugh. And some simply leave a lasting impression — one that you wouldn’t give up for the world.