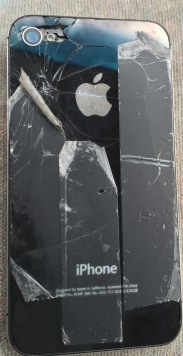 around with this. A shattered iPhone4 with a broken camera.

Don’t be surprised by the look of it. If you’ve read any of my blogs you know I drop things all the time. I remember dropping this sucker and watching it land on a big rock.

Anyway, I was due for an upgrade, so I caved and bought the iPhone6. Didn’t want to spend the money, but trying to answer my phone while hiding it from the public became too cumbersome.

When I got it home my son said, “Hey, you have Siri on your phone.” I was like… “I do? I’ve only heard of Siri — through visitors from faraway lands.”  That’s too strong, but you get my drift.

After asking Siri a number of questions like, “How do I get rid of belly fat?” and she’d kindly answer, “Checking… Here’s what I found on the web about how to get rid of your disgusting belly fat.” And she’d list a bunch of sites — that I will never look at.

Then, I decided to have some fun with my new-found friend.

How are you feeling?
Siri: I’m fine thanks for asking.

For good measure, I asked again….

How are you?
Siri: I’m finer than a frog’s hair.

What the hell is Siri talking about? My friend said that’s a southern saying, so maybe Siri is from Georgia. Then I wondered how Siri would handle it if I swore at her.

Now, I’ve gone and offended her. But she kept her cool. I have to respect that.
Then I asked her something she couldn’t have possibly done.

Have you ever climbed a mountain?
Siri: Who me?
Yes.
Siri: I figured as much.

But she never really answered.

At this point, even though I’m laughing like a five year old, I’m also realizing that I’m talking to a phone.

And thinking maybe I should put it down.

I don’t think I’m ready for new technology. Anyone for a game of PONG?