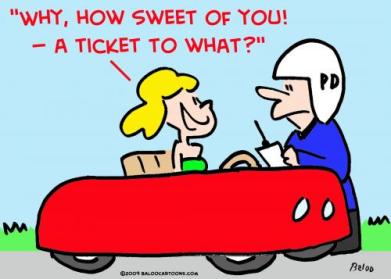 I would pride myself on the fact that in the first 45 years of life I never heard the words “license and registration, please.” And now I realize I shouldn’t have bragged about it, because Karma has a way of biting you in the ass.

In 2011, my kids and I were spending a week with my parents in Florida. I decided to head to Boca for a day to visit a friend and left at the break of dawn. Just when I passed through an early morning fog I saw signs that I was entering a school zone and immediately slowed down. But it was too late. My first offense and I was only going 35 miles an hour.

A police officer, I will call “Chip” because he clearly used to be a Chippendale’s dancer, pulled me over. Instead of being nervous, I was more consumed with what he looked like with no shirt and a bow tie. After looking at my license he said “Oh, you’re from Upstate New York? So am I. And I have a cousin that lives in the same town as you.” So, of course I said “Reeeeeeeeally?” batting my eyelashes seductively. I didn’t know his cousin, but as we talked about our future together… I mean, as we talked, it turns out he grew up in the same town where I went to college. And in the end, his last words were “I’m not going to give you a ticket. Just promise me you’ll drive safe and have fun visiting your friend.”

Later that year, I was cutting through a neighborhood side street and stopped at a stop sign, then continued on. Well, I guess I didn’t come to a complete stop. And there sits a cop. I distinctly remember looking right at the officer and mouthing the words “OH SHIT!” I had to think fast. I once heard a story of a police officer who pulled over his former English teacher for the same offense; he said to him “…back there at that stop sign, well that was a comma, not a period.” I thought that was a funny line, so I used it – admitting my guilt. He laughed. Apparently officers like comedy. I then told him that if he needed to give me a ticket to please hurry. I had to pick up my daughter from softball practice or she’d be at the school all alone. Which was the truth. He said “How about this? I’ll just give you a warning. Does that sound fair?”  What? He was asking me? “WELL, HELL YEAH THAT SOUNDS FAIR!!!” And I was on my way.

My third offense happened the following year on my way back from Florida. I was pulled over for speeding. I had gotten off the highway and was traveling a country road that turned from 65 mph to 55 mph and I didn’t see the sign. The officer came to the window, and when I reached into my glove compartment I noticed a second officer had his face pressed up against the passenger side window. He scared the living breathing SHIT out of me…and my kids. I literally started to shake. I said to the “nice” officer, “I’m sorry. I’m nervous.” He said “Oh, please, no need to be nervous. I just wanted to give you a warning, Ok? I won’t give you a ticket.”

Then it happened. It finally happened. I was pulled over by a woman. The dreaded female cop. I was traveling in the middle lane of the highway, just following traffic, and she nabbed me.  I didn’t even realize I was speeding. And of course I’m thinking… “Hey, they were all speeding too!” I was the scapegoat and I wasn’t sure what to do.  Plus, she was a meanie. So, I took what was coming to me, and at the ripe age of 48, I got my first ticket.

Those suckers are expensive! I do try my best to follow the rules of the road. And I pray I can go another 48 years before the next one.